Does Florida allow a stand your ground defense? 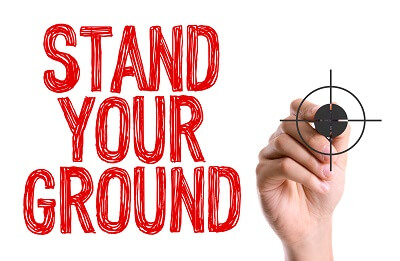 Because the terms of stand your ground laws vary significantly from state to state, they are often misunderstood by individuals facing charges related to the use of deadly force. Knowing what Florida allows is crucial if you think this defense might be applicable to your case.

Florida Statutes Title XLVI § 776.012 is commonly referred to as the stand your ground law. It outlines the conditions for justifiable use of deadly force and broadens the scope of a self-defense claim. It reads:

Stand your ground laws are sometimes referred to as part of the castle doctrine that allows a person to protect against an intruder in their home. However, this description is not entirely accurate in terms of Florida law as the stand your ground statute applies to a broader range of situations and the person using the force does not necessarily need to be in their own home.

If applicable, Florida’s stand your ground law protects a person from both criminal and civil prosecution related to the use of force.

While the law is clear that you are allowed to use deadly force if you are in a place where you are entitled to be and that you are not required to escape danger before using force, the definition of “reasonably believes” is less certain.

A person is presumed to be in danger if the individual they used defensive force against was unlawfully entering or had entered a dwelling, residence, or occupied vehicle. There is also a presumption of danger when the individual using the force knew or had reason to believe that an unlawful and forcible entry or act was occurring or had occurred.

Applying the stand your ground defense to cases of domestic violence is particularly challenging because the courts are often inconsistent in recognizing the signs of danger. For example, someone who has been abused by their partner over an extended period might recognize a specific tone of voice or gesture as a sign of impending danger. Yet, a judge or jury may find this explanation insufficient.

The stand your ground defense will not apply when the person who is using force:

Why You Need an Experienced Criminal Defense Attorney

Charges related to the use of deadly force, such as those for manslaughter, murder, aggravated assault, and illegal discharge or brandishing of weapons, carry the possibility of significant time behind bars. While the stand your ground defense may apply to your case, multiple variables must be considered before it can be used successfully. Your best course of action is to work with an experienced criminal defense attorney to determine how to proceed.

At George Reres Law, we are committed to helping you protect your future and will work aggressively to defend your freedom. Regardless of the specific charges you’re facing, we will listen to your story, explain your options, and advocate for your interests at every stage of the criminal court process. Call us at (954) 523-3811 or fill out our contact form to request a confidential consultation.